The NBYO is one of the most innovative and distinguished youth orchestras in Canada, and features some of the province's most talented young musicians. Its mission is to inspire children and youth to achieve their full potential through learning and performing orchestral music.

The NBYO has five CD recordings and has received an East Coast Music Award for best classical recording. In addition to performing with a high level of excellence, the Orchestra continues to commission original works, collaborate with guest conductors and performers, and tour both in New Brunswick, Canada and internationally.

The NBYO's is committed to developing an outstanding provincial youth orchestra, expanding the participation of young people, and creating greater awareness and appreciation for orchestral music in New Brunswick. 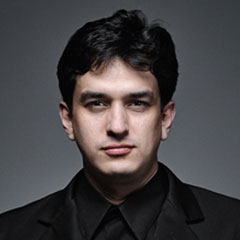 Since August 2010 Antonio (Tony) Delgado has been the Musical Director and conductor of the New Brunswick Youth Orchestra (NBYO). Born in Caracas, Venezuela, he owes much of his musical education to the world-renowned El Sistema program (National System of Youth and Children's Orchestras of Venezuela). His love of orchestral music has taken him all over the world, including through performances in Ecuador, Puerto Rico, Canada and Panama. Delgado has also conducted every major orchestra in Venezuela.

From 2005 to 2010 Delgado was Musical Director of the National Theatre "Teresa Carreño" the largest arts centre in South America. During this time he conducted the major orchestras of the country in symphonic concerts, ballets and operas, garnering particular acclaim for his "very elegant musical direction and his absolute mastery" of ballet and opera scores (Diario La Voz. Caracas).

In giving back to his musical roots, Delgado is Music Director and Conductor of the NBYO's outreach program, Sistema NB. The program, closely modeled after the Venezuela program, offers school-age children across New Brunswick an opportunity to learn to play a musical instrument in an orchestral setting.